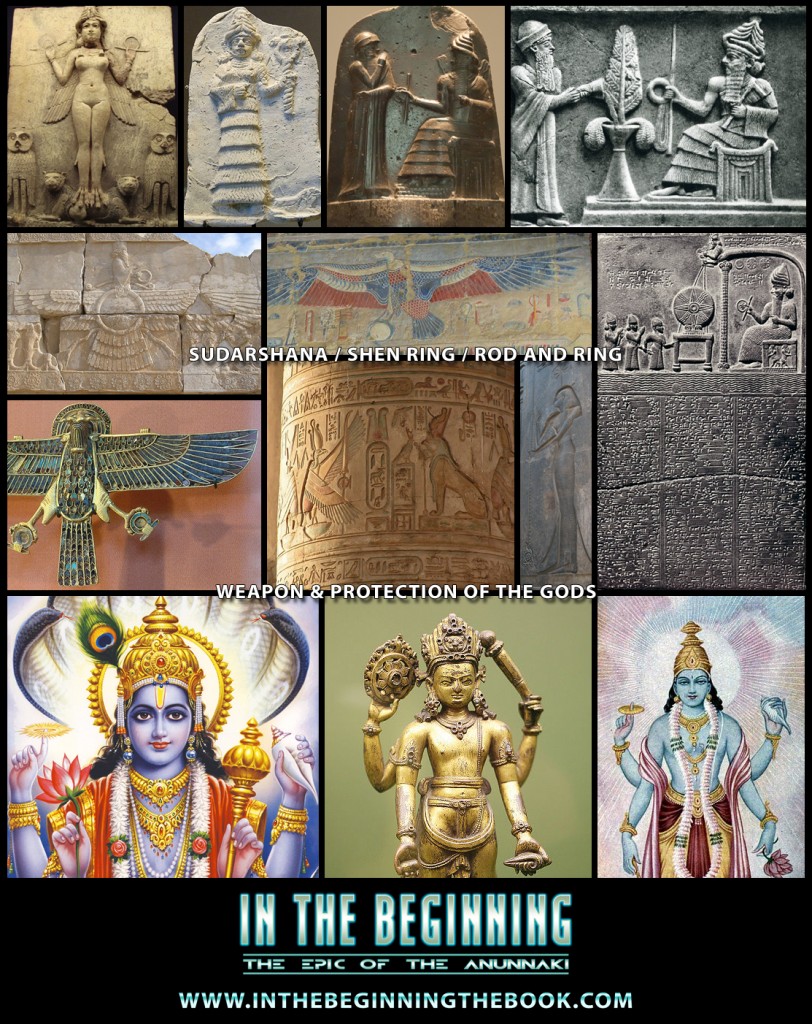 One of the main points that Ancient Astronaut theorists make is the fact that many unrelated ancient cultures described gods as flesh and blood beings, interacting with mankind as well as using unknown advanced technology. These various civilizations from around the world wrote and depicted their gods and the technology used to the best of their ability through images and language that was available.

One common element that I have found is that they typically depict their gods holding a variety of objects. One of these objects is a discus that is said to be a weapon or method of protection for these gods. In most cases, the gods are depicted as holding this discus when interacting with humans, almost as a force field or layer of protection, possibly an advanced weapon. It has been depicted by the Sumerian, Akkadian, Ancient Persian, Vedic (Ancient India), and Pre-dynastic and dynastic Egyptian cultures. They all seem to describe this object as something that encircles the holder and protects them from harm. Is it possible that these are all myths/religious stories with separate origins or are they all describing some commonly seen advanced technology??

Here are some detailed explanations:

Vedic:  The Sudarshana Chakra, is a spinning, disk-like super weapon with 108 serrated edges used by the Hindu god Vishnu. According to the Puranas, Sudarshana Chakra is used for the ultimate destruction of an enemy.  Among all the Vedic weapons, Sudarshana Chakra is the only mobile weapon. The use of the Sudarshana Chakra is occasionally mentioned in the Hindu texts of Rigveda, Yajurveda and Puranas, as an ultimate weapon to eliminate the enemy of law, order and preservation. the sudarshan chakra is a weapon used by the Hindu god Vishnu or his avatar and eighth incarnation, Krishna. While Vishnu, or Krishna, is most famous for using the discus, there are a few other Hindu deities capable of using this weapon. They are primarily female deities and include Narayani and Vaishnodevi. There are also deities that wield similar discus weapons that contain nearly identical properties. Though discus in shape, the sudarshan chakra is not tossed or thrown. The discus is held on Vishnu’s finger. When he aims at an enemy, the discus acts according to his will and attacks the enemy. Just as the discus is used to defeat enemies, many people pray to the discus to defeat trauma and afflictions. The discus is also sometimes regarded as a shield to protect against negative energies. Also related is the Sudarshana Yantra, which is something like a spiritual weapon. This sacred plate with a circle sketch is presumed to be that of Lord Vishnu. When the effects of sudarshana mantra are energized, it picks up its responsibility to protect the interest of the persons who possess it. It acts and reacts as a security cover on any individual who has this during the perilous situation. It will encircle with its miraculous power, one who possesses it.

The Rod and ring symbol is a symbol that is depicted on Mesopotamian stelas, cylinder seals and reliefs. It is held by a god or goddess ( Anunnaki ) and in most cases is being offered to a king who is standing, often making a sacrifice, or otherwise showing respect. The symbol dates from the Sumerian Renaissance to the Neo-Assyrian Period. The Egyptian Shen ring has an identical resemblance.

Also, from the Book of Genesis: “He drove away the man, and stationed the cherubim (angel of destruction) at the east of Eden, along with the revolving sword blade, to guard the path of the Tree of Life.”