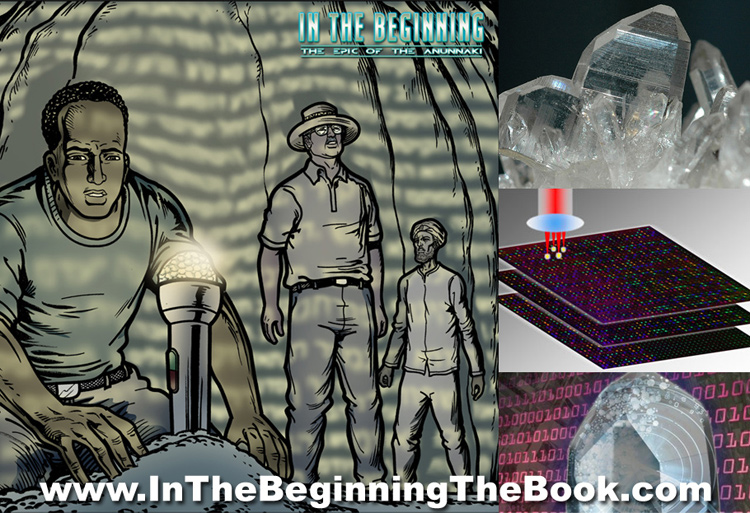 In the Book, “In The Beginning : The Epic of the Anunnaki”, a crystal is found that seems to store ancient information in the form of light refracting through the facets, engraving, and insides of the crystal’s structure. Now, science has created such a device to preserve human knowledge without the risk of degradation. It has been theorized that the “ME”, as described by the Sumerians, were a similar device used to store knowledge by the Anunnaki, later taught to mankind.

“Nanostructured glass has been demonstrated as a medium for recording digital text in 5-D using a femtosecond laser. The portable memory technology could store vast quantities of information — 360 TB on a disc — for more than a million years. The technology, developed at the University of Southampton and Eindhoven University of Technology, was dubbed the “Superman” memory crystal as a nod to the “memory crystals” featured in Superman films. The method records data via self-assembled nanostructures created in fused quartz. The storage allows unprecedented parameters, including 360-TB/disc data capacity, thermal stability up to 1000 °C, and an unlimited lifetime. The self-assembled nanostructures change the way light travels through glass and modify its polarization, which can be read using the combination of an optical microscope and a polarizer similar to that found in sunglasses. “It is thrilling to think that we have created the first document which will likely survive the human race,” said ORC group supervisor professor Peter Kazansky. “This technology can secure the last evidence of civilization: all we’ve learnt will not be forgotten.””
http://www.photonics.com/Article.aspx?AID=54353#sthash.eQw43Pho.dpuf

“In Sumerian mythology, a ME is one of the decrees of the gods foundational to those social institutions, religious practices, technologies, behaviors, mores, and human conditions that make civilization, as the Sumerians understood it, possible. They are fundamental to the Sumerian understanding of the relationship between humanity and the gods. The MEs were originally collected by Enlil and then handed over to the guardianship of Enki who was to broker them out to the various Sumerian centers beginning with his own city of Eridu and continuing with Ur, Meluhha, and Dilmun. This is described in the poem, “Enki and the World Order” which also details how he parcels out responsibility for various crafts and natural phenomena to the lesser gods. There is no direct connection implied in the mythological cycle between this poem and that which is our main source of information on the mes, “Inanna and Enki: The Transfer of the Arts of Civilization from Eridu to Uruk”, but once again Inanna’s discontent is a theme. She is the tutelary deity of Uruk and desires to increase its influence and glory by bringing the MEs to it from Eridu. She travels to Enki’s Eridu shrine, the E-abzu, in her “boat of heaven“, and asks the mes from him after he is well into his cups, whereupon he complies. We never learn what any of the mes look like, yet they are represented as physical objects of some sort. Not only are they stored in a prominent location in the E-abzu, but Inanna is able to display them to the people of Uruk after she arrives with them in her boat. Some of them are indeed physical objects such as musical instruments, but many are technologies like “basket weaving” or abstractions like “victory”. It is not made clear in the poem how such things can be stored, handled, or displayed.
http://en.wikipedia.org/wiki/Me_%28mythology%29