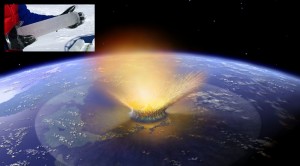 In a previous post ( http://on.fb.me/12TKsxC ), I mentioned how scientific research has suggested a brief warming period on Earth before the last ice age ended, caused by a cosmic impact (possibly the cause of the flood myths found around the world). Now, scientific research into ice cores is showing that another potential cosmic impact is what started the ice age to begin with. This climate flip has previously been linked to the demise of the North American “Clovis” people. The data seem to support the idea that an impact tipped the climate into a colder phase. My theory is that most, if not ALL, of our Earth changes have been caused by impacts, slight changes in the orbits of the planets, and solar changes as well. Another possibility is that Planet X/Nibiru’s extreme orbit has triggered many of these impacts. I also think that many, but not ALL, of the megalithic structures found around the world were built to measure and predict such Earth changes and help the people, at the time, survive. The Anunnaki were possibly the ones to teach various human civilizations of these potential calamities and how to predict them by watching the alignments of the planets and stars using these giant structures. This knowledge led to astrology, advanced astronomy, mathematics, and the idea that the Earth has experienced several ages of destruction and revival of civilization. This would also explain the various underground shelters built in ancient times, most likely to survive the coming catastrophes that were predicted.

“Rapid climate change occurred 12,900 years ago, and it is proposed that this is associated with the extinction of large mammals – such as the mammoth, widespread wildfires and rapid changes in atmospheric and ocean circulation. All of these have previously been linked to a cosmic impact but the theory has been hotly disputed because there was a lack of clear evidence. New platinum measurements were made on ice cores that allow conditions 13,000 years ago to be determined at a time resolution of better than five years, report Michail Petaev and colleagues from Harvard University. A 100-fold spike in platinum concentration occurs in ice that is around 12,890 years old, at the same moment that rapid cooling of the climate is indicated from oxygen isotope measurements. This coincides with the start of a climatic period called the “Younger Dryas”. Such rapid climate change makes it difficult for ecologies and societies to adjust.”