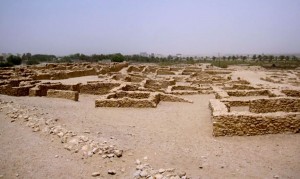 Here’s another ancient civilization, in Bahrain, that not only worshiped gods, but is believed to have physically housed one of the most known gods named Enki. Were these really gods, or were they just mistaken as gods by some who were not aware of their nature?

“Excavations at an archaeological site in Bahrain are shedding light on one of the oldest trading civilisations. Despite its antiquity, comparatively little is known about the advanced culture represented at Saar. Bahrain is a Unesco regional headquarters and one of its key attractions is an abundance of ancient sites. Dilmun, one of most important ancient civilisations of the region and said to date to the third millennium BC, was a hub on a major trading route between Mesopotamia – the world’s oldest civilisation – and the Indus Valley in South Asia. It is also believed that Dilmun had commercial ties with ancient sites at Elam in Oman, Alba in Syria and Haittan in Turkey. “For 4,000 years this site was underground so it was sheltered,” The site is impressive: the outer walls enclose an area of several hundred square metres. At its centre lie massive carved stones marking the entrance and walls of a chamber containing an altar once flanked by copper-faced pillars. Next to it is another structure where the presence of blackened animal bones and charred earth suggest a chamber for sacrifices to the gods. On the other side of the central altar, a flight of carved steps leads down to a pool, a deep, stone-walled well built over one of the numerous underground springs where one of three principal Sumerian deities – Enki, the water-dwelling god of wisdom – supposedly lived. The island was an oasis of fertility in ancient times in a mainly desolate region. This could have given rise to a legend that Bahrain may even have been the biblical Garden of Eden.”